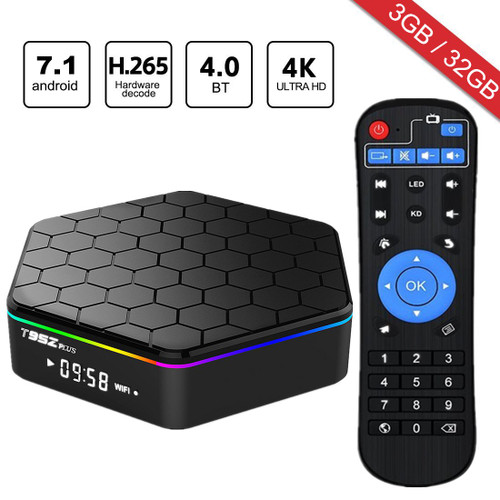 Turn Your TV Into Smart TV Today and Stream Your Netflix, amazon Prime Movies and TV Shows in Stunning 4K

T95Z Plus comes with S912 CPU which is a high performance octa-core 64bit chipset which is known for a maximum speed up to 2.0GHz, as well as Mali-T820MP3 GPU, the quality configuration provides you with ultra-fast running speed and professional graphic processing ability.

Powered By Android 7.1 OS, compatible with the vast majority of Android APP, to meet the needs of different users, games and monitors.

the ability to migrate data and applications to a microSD card and use it as primary storage, as well as other internal changes.

This T95Z Plus comes with upgraded 3GB/ 32GB high-speed flash memory which gives the device the
double storage and performance. 3GB of DDR3 Ram and 32GB Storage, allows you more space to download your favorite
APPs and caches to browse websites, play games, run apps smoothly.